refreshing the page,
deleting your browser data, closing and reopening the browser
OR contacting us
Close
Review this Product 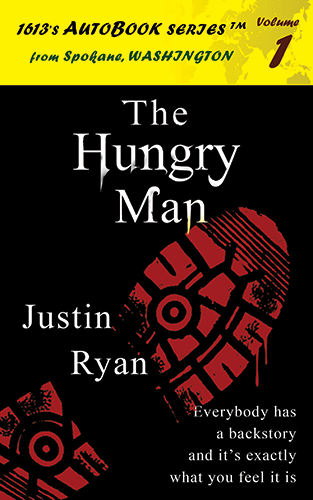 OTHER FORM(S):
eBook
Digital Audiobook
Audiobook CD
Description
A 30-something-year-old man, unhappy with his lot in life, once again, enters an old trail to meet a young attractive drifter. The two men, over time, developed a unique relationship. After receiving some life-changing news from his fiancee, the man plans to give his friend a new lease on life. This changes, however, when he stumbles upon a mysterious killer in the woods. Will the man attack, run or experience the fate that befell his friend and other victims?

The book includes pages that readers can autograph and share with other readers, so recipients can do the same. This particular book is the first in a series of 1613 AutoBooks.

This story is a literary homage to classic horror movies with the protagonist's--or victim's--gender flipped and the killer's sexuality ambiguous. My objective (with this work) is to expand the audience and broaden the landscape of horror, mystery and thrillers.
Author(s): Justin Ryan :: Artwork: Anthony Wilbourne
This product is available at:
Amazon
Barnes & Noble
Videos